WHITE 'CV' EARTHENWARE from 1849
Description from Twyfords 'J' Catalogue of about 1910. 'This material consists of a pure white clay body specially selected for its density and very fine texture. When glazed and fired at the extremely high temperature to which all our wares are subjected it produces an imperviable material of great strength with a smooth lustrous surface equalling that of fine china or porcelain table ware. White "CV" Earthenware has no superior for use in the manufacture of domestic sanitary appliances.

'Decorated Ware  . . . All our White 'CV' Earthenware goods can be supplied in an extensive series of decorations. These range from lining and relieving in blue and gold or gold only, to ﬂower and delicate border decorations in one colour, blue, green, pink, brown, etc.. or in a combination of realistic colours. For the gilt decorations. we use only the very ﬁnest burnished gold, and the colour work. being applied under-glaze is absolutely permanent. Designs and Prices on application.'

ADAMANT FIRECLAY from 1899
'Enamelled' fireclay. Refractory buff coloured clay body with a white vitreous enamelled surface and fired to a very high temperature. It was thick and very strong and would withstand rough usage. Very large pieces can be made with this clayware recipe. ( Before the introduction of the Adamant branding fireclay was called Cliffe Vale Porcelain Enamelled Fireclay. 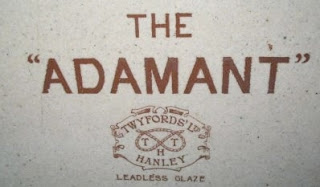 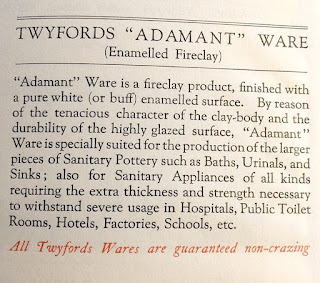 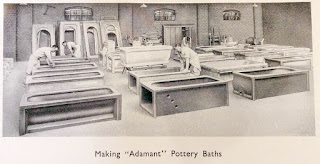 Introduced as an alternative to the earthenware pottery recipe. Forerunner of Duramant. Guaranteed to be non-absorbent. Introduced in around 1900. "Mr Twyford had built up a reputation for quality, design and workmanship, during the years he had controlled the business since the death of his father and this was further enhanced when he introduced 'Vitrina’ ware. Hitherto the difficulty had been to produce sanitaryware which, without glaze, would be virtually non-absorbent and from which articles could be made which would be as pleasing in appearance and as artistically decorated as goods made in the finest earthenware. Vitrina ware had all these qualities and in introducing it was described as "a new material" non-absorbent which sanitarians would appreciate, more "particularly as applied to WC basins. It was of great density and strength, equal to the strongest ﬁreclay and was confidently introduced as the most perfect material from which sanitary pottery could be made. A few years later
(1904) samples of Vitrina ware were submitted to the Testing and Experimental Works in London and also Vitrina ironstone ware in which the heavy type of WC basins were made." 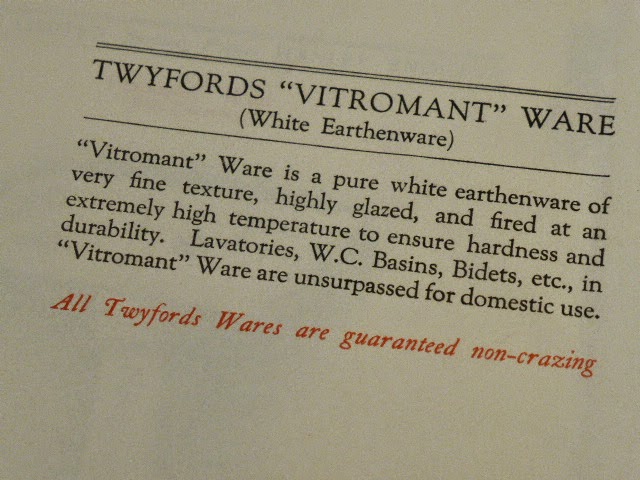 DURAMANT from 1923
Heavy Earthenware. Similar to Vitromant but thicker, heavier and stronger. 'Well worth a small extra cost where increased strength is desirable.'

Introduced around 1923 when it first appeared in the new comprehensive Twyfords 'L' Catalogue.

Duramant was, it was claimed, to have 'the appearance of fine earthenware, with a rich glossy surface guaranteed not to craze or discolour and pure white through the whole thickness of the material. Eminently suitable for hotels, restaurants, offices, banks and other public or semi public buildings and also for domestic installations of the higher grade.'

Completely withdrawn  from production in 1960 in favour of Ceramant Vitreous China. 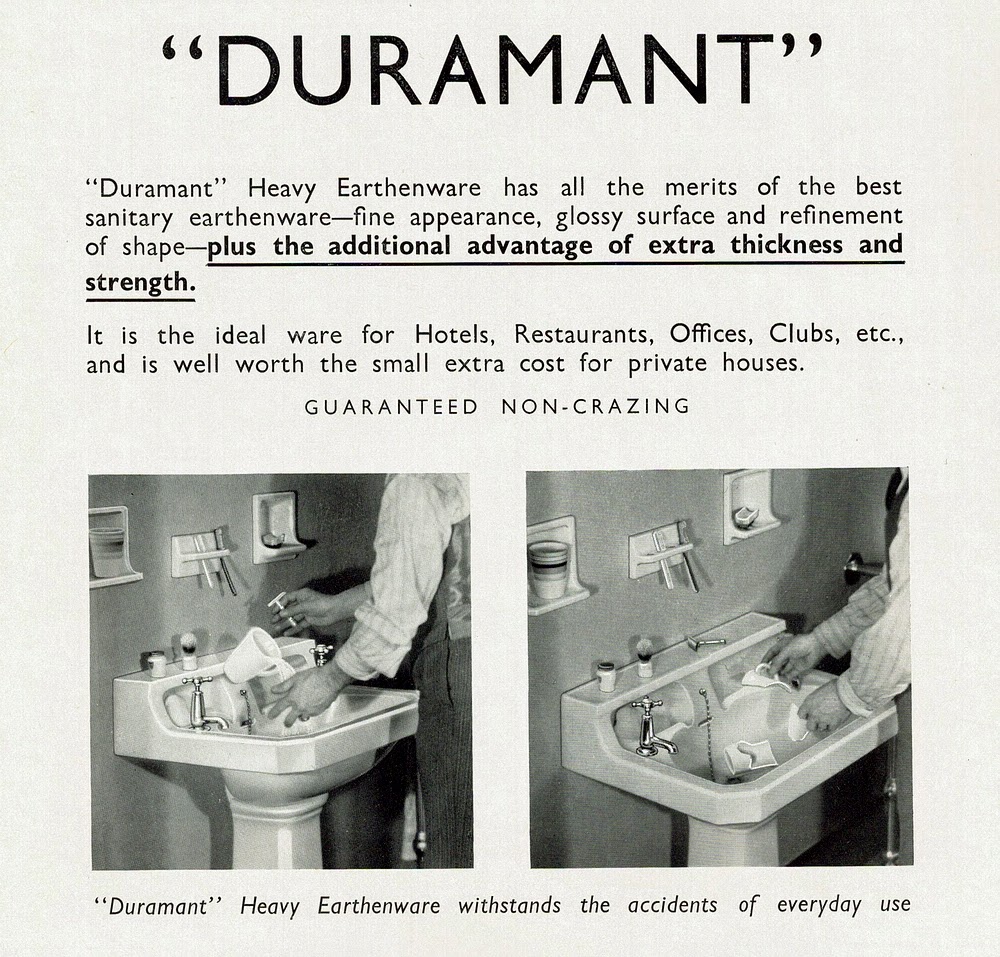 CERAMANT  from 1938
Vitreous China. Twice fired. First introduced around 1939 but production was halted during the Second World War. It was reintroduced in 1950/51.  The new 1957 Alsager Works was dedicated to the production of Ceramant.   A white vitreous (non porous) clay body of very fine texture with a glazed white or coloured surface. The clay is vitrified in the firing process so that to all intents and purposes it is non porous and will not absorb moisture. It is denser and stronger than earthenware of the same thickness but dearer. A strong superb quality ware that will not craze, stain or deteriorate in any way. It will satisfy the most exacting demands of quality. The most suitable ware for many fixtures in semi public buildings like hotels, offices, schools, hospitals etc. 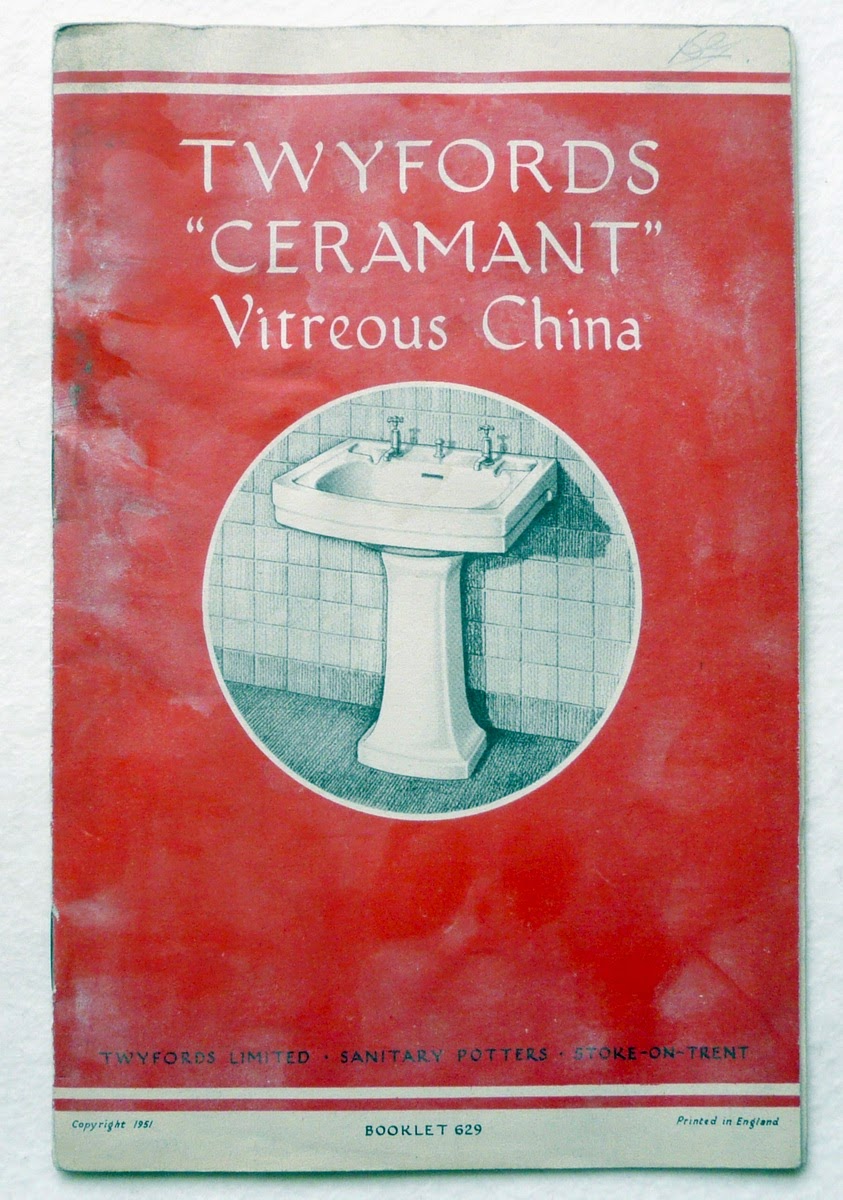 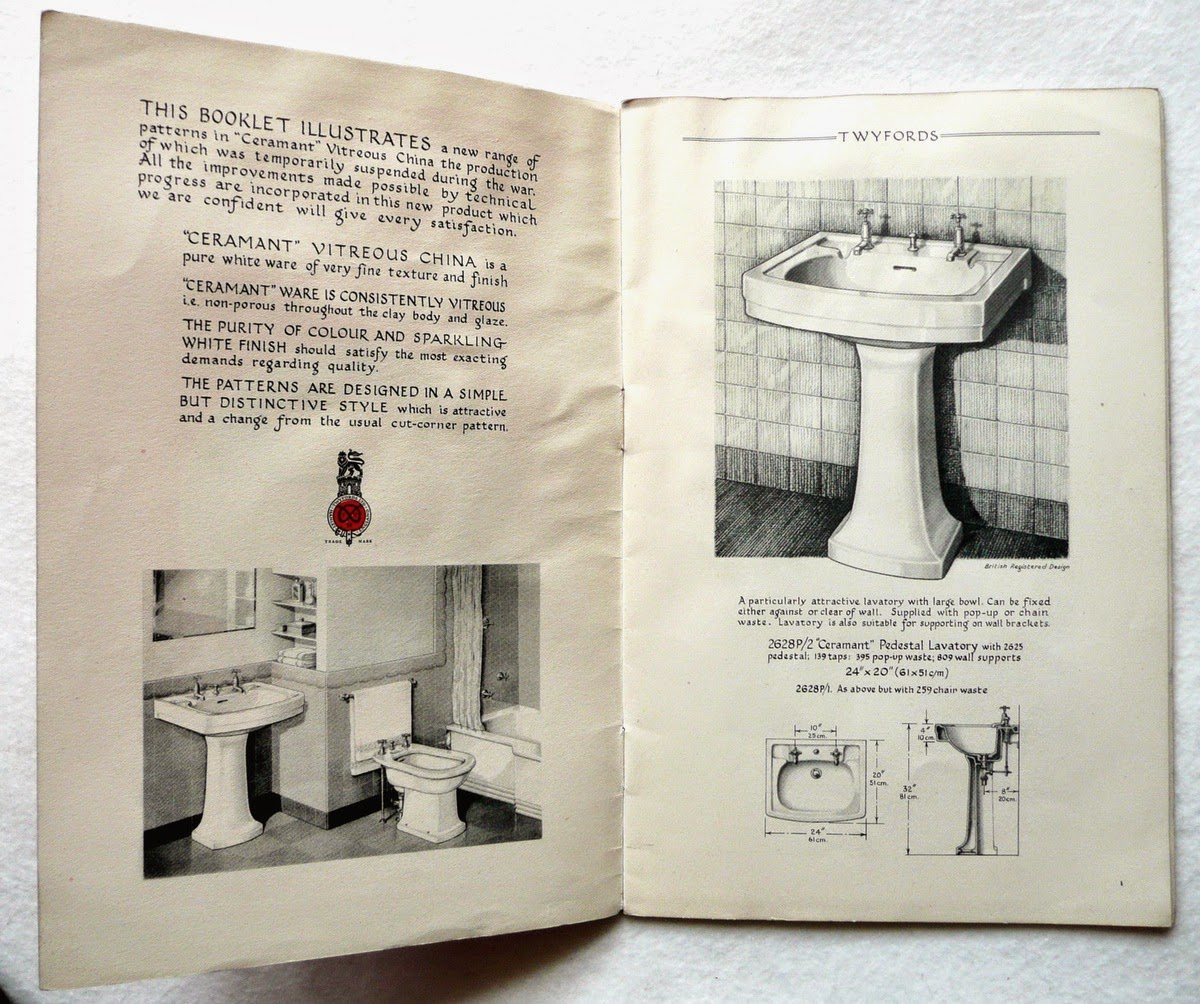 VITREOUS CHINA from 1957
Vitreous China Once fired. The pottery body recipe favoured  today as the material from which the main items in the bathroom are manufactured - the WC and cistern, washbasin and pedestal, and bidet.

Vitreous china is a white firing ceramic body with a fine texture. A blend of clays, fillers and fluxes are vitrified during the firing process at around 1200 degrees centigrade and the white or coloured glaze which has been applied to the basic shape is fused both chemically and physically to the clay body. The result is a homogenous, non-porous piece of considerable strength. The hard surface is resistant to fading, stains, burning, scratching and acid.

First experiments with this recipe were made by Twyfords in 1951. Full production was achieved in December 1967 with 40 potters using the material at the Twyfords Alsager factory. Shortly afterwards vitreous china was introduced as the main product in all Twyfords factories. Production finally ceased in the UK in August 2011.


FINE FIRECLAY  from 1995
'Modern' fireclay (1995) is a blend of refined refractory ball clays and "grog". When these clays are used to produce sanitaryware, the resultant product has a comparatively thick body of sufficient strength to withstand constant rough treatment. The body of Fine Fireclay is buff coloured and this is coated with a white ceramic undercoat called engobe which, in turn, is coated with two coats of glaze. The glaze is tough and vitreous. Never manufactured by Twyfords.