The Twyford family has been associated with the manufacture of pottery in North Staffordshire since the 17th Century.

During the 20th Century the Twyford brand became a household name in British public life. And, through organic and well-managed expansion, it became a major force in sanitaryware production in three more of the world's continents. The company blossomed in South Africa, India and Australia, bringing bathrooms, the principles of hygiene, and much needed employment to their peoples.

Today, Twyfords is a shadow of its former self. It is now part of the Geberit Group, headquartered in Switzerland.

This blog was created to record and recognise the great achievements of the company during its long and remarkable history.

From a lecture on 'Sanitary Pottery' given to The Builders Merchants Alliance in October 1924 by Walter G Walker of Twyfords.

" Years ago, when one wanted to install a bathroom deluxe, it was considered to be the thing to have the lavatory and WC basin, etc. decorated either with blue and gold bands or with ﬂowered designs, often hand-painted in various colours. Sometimes the ware itself was formed with a decorative pattern in relief. Today the demand is for all white pottery sanitary ﬁxtures, any feeling of coldness in the bathroom being avoided by having the walls either tiled or otherwise tinted in warm colours.

" This demand for all-white bathroom suites is rapidly spreading to include the accessories and ﬁttings as well as the ﬁxtures, the underlying motive being bathrooms that can kept spotlessly clean with an absolute minimum of labour. 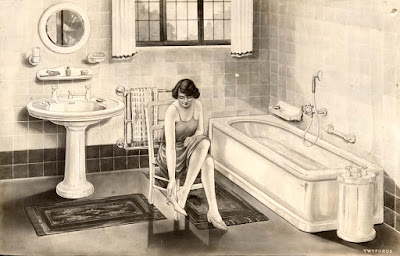 " Accessories such as mirror frames, shelves, towel rails, sponge holders and the like, can already be obtained in white pottery, but it is obvious that ﬁttings such as taps and other working parts cannot be satisfactorily made wholly of pottery. Fittings of this kind are obtainable in brass with a white ﬁnish. By the use of these pottery-clad ﬁttings the entire lavatory - or other ﬁxture - can be kept perfectly clean merely wiping the whole outﬁt over with a damp cloth or sponge. " 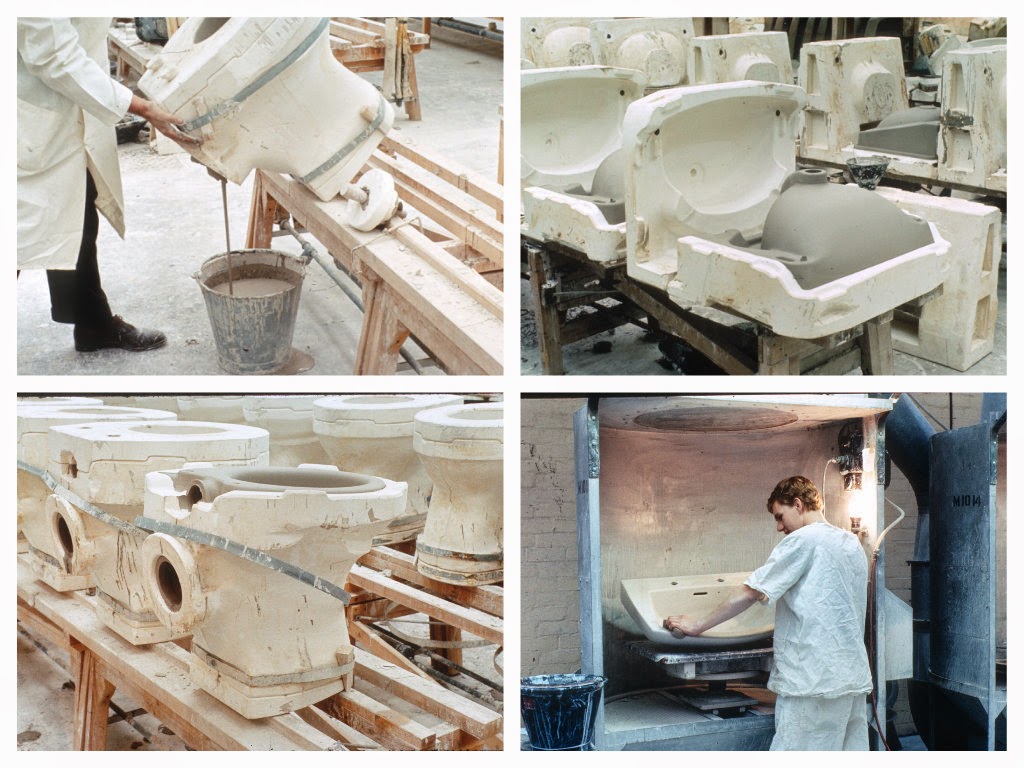 The building of ALSAGER WORKS 1956

The land was levelled, the roadways cut and the storm water and sewerage systems dug. This was all done by August 1956. By November, the building contractors, G. Percy Trentham  were able to set to on the factory proper, beginning with the sliphouse. The stack for the first kiln, Number Seven, was completed in June 1957, and the first of the buildings and making shops made ready. The sliphouse was operational by February 1958, and in that same month the kiln was lit.

The second kiln, Number Eight, was firing just four months later, and at the end of June ‘58, the factory came into large scale production.

On 23 August 1957 the 'Alsager Times' reported :  Good progress had been made with the new Vitreous China factory at Alsager. "We notice that Twyfords' new factory at Alsager is rapidly taking shape and that roofs are now on some of the buildings. It certainly looks a very handsome factory and far from detracting from the appearance of the district, we might say that it provides quite a smart new approach to the village from the North Staffordshire end."

Thomas William Twyford was born in Hanover Street, Hanley, Stoke-on-Trent at two minutes before four in the afternoon of Sunday 23rd September 1849. He was the eldest son of Thomas Twyford and Sarah (nee Jones). He came from a family of potters who had started making commercial pottery in 1680.

In 1887 Thomas William Twyford opened his “model” factory in Cliffe Vale near Hanley. The factory was described as “model” because it was considered by government inspectors, at the time, as a pattern for all Staffordshire factories. Each workman had his own window and fresh air.

Up to 1886 Thomas William was Liberal in his politics. He then split with the party over the issue of Home Rule for Ireland and later became the chairman of the North Staffs Unionist Party. He contributed to the foundation of the Unionist Newspaper, The Staffs Evening Post, whose first issue appeared on 29th March 1892. Rivalry between The Post and the other local paper, The Sentinel, lasted for about four years when the two papers eventually merged. Thomas William Twyford became the Chairman of the Evening Sentinel in 1896.

In March 1888 Thomas was appointed to the magistrates bench. He served as Deputy Lieutenant of Staffordshire and in 1906 became High Sheriff of the county. The Grand Duke Michael of Russia, who leased the nearby Keele Hall, in the first years of the 20th Century, conferred on him the Order of St. Ann.

In the South African war he helped to found the Soldier and Sailors Family Association and in the First World War provided premises in his Bath Street works for the Hanley Infants Welfare Centre. He became a Colonel of the local volunteer force and was a member of the North Staffordshire Tribunal.

He was twice President of the Staffordshire Agricultural society, a supporter of the allotment movement and a patron of the Hanley Flower Show. He served as President of the North Staffs Choral Society and was an authority of on early Staffordshire pottery. His own collection is now with The Potteries Museum and Art Gallery, Hanley.

He married Susannah, daughter of Edward Whittingham, in 1872 and had two children;  Harold who served in the South African war and the First World war, and Dora who helped establish the Scout and Guides movement.

The family lived successively at Shelton, Endon, Moor House, Biddulph and finally at Whitmore Hall, where Thomas became a breeder of Labrador Retrievers and became a member of the North Staffs Hunt.

He died at Chine Hotel, Boscombe, Bournemouth, on 21st March 1921 and was buried in Whitmore churchyard in sight of his home, Whitmore Hall. There is a memorial to him in Shelton Church, near Hanley.
Older Posts Home