One piece of ceramic - a breakthrough at the time. Washout closet. By 1880 the sales of this pan were reaching 10,000 a year.

https://youtu.be/e5kIim_F4vw
The Twyfords Twycliffe in action.
Many thanks go to Sam Jackson at 'sparkyfireworks' for
uploading the video of his test results to YouTube 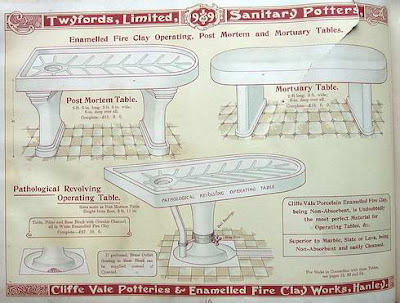 Patented in 1911 the sloping toilet (forwards or backwards) was designed to improved comfort. It didn't catch on! 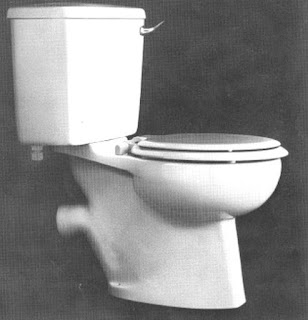 """ This invention relates to so-called air extraction devices for use with w.c. pans of the type having two traps whereby use is made of the flushing water supplied from the cistern to the pan to extract air from the intertrap space and thereby effect siphonic discharge from the pan.

The object of the present invention is to provide an improved air extraction device for this purpose. In general, the air extraction device with which the invention is concerned comprises a tubular body for insertion in the flush passage extending between the cistern and a w.c. pan so that the flushing water passes through the tubular body, a pipe supported within the tubular body so as to project beyond the body for communication with the intertrap space of the pan, that part of the pipe within the body being provided with one or more openings whereby an air flow path between the intertrap space and the interior of the tubular body is provided, and the means for creating suction in the vicinity of said opening or openings in response to passage of flushing water through the body."


Many thanks go to Neil Eggington for finding this Patent and passing on the information for upload to this site  More here  > https://patents.google.com/patent/GB2117023A/en?inventor=Arthur+Victor+Pimble

In 1961 new housing standards were published. Amongst the recommendations was the need to include a hand rinse basin in every toilet that was separate from the bathroom.

The Barbican Housing Project was a massive 1960s housing development with over 800 apartments being built in the centre of the City of London. The architects required a hand rinse basin which could be built into the wall of the toilet cubicle in order to meeting the building standard and to take up little space.

The Barbican hand rinse basin was specially designed to fit into these rather diminutive toilets the City provided in their flats. The main body of basin being buried in the wall so that no space was taken up in the room.

The hand basin was designed by L Michael Hohmann, who was an architect working with Chamberlin Powell & Bon, and who later practiced as LMH Design at The White House, 179 White Horse Hill, Chislehurst, Kent.

Twyford’s Barbican hand rinse basin was the result “Available in ﬁve pastel colours and with left or right hand taps” was the advertising punch line. And the basin took off, even though it was the devil of a job to install!
The five pastel colours were White, Primrose, Sky Blue, Shell Pink, Turquoise and Pampas. Apart from the classic white and the ever popular Pampas the other four pastels were withdrawn and made obsolete by 1980.
Text of the news item "Barbican Basin - The award-winning handrinse basin specially designed for the Barbican development in London is now available for the domestic market. It is 16in high and 20in wide and has a toilet roll holder beneath the soap tray. Colours are white, blue, pink, primrose, turquoise and pampas and fittings are either gold-or chrome-plated. Made by Twyfords Ltd, PO Box 23, Stoke-on-Trent ST4 7AL and Africa House, Kingsway, London WC2, 0782 23411 and 01-405 8606, price £25 in white and £29.20 in colour"
The Barbican won design awards and was regarded at the time as a benchmark product. It has been used in applications as varied as railway carriage toilets and MacDonalds restaurants.

To celebrate the Barbican Project a major new exhibition opened at the Barbican Galleries in London on 14th February 2002 and the Barbican hand rinse basin formed a major part of the display. 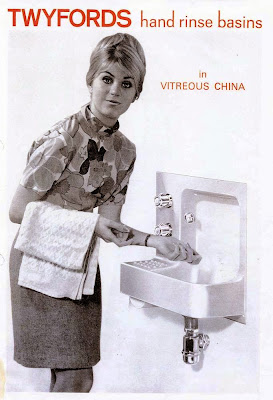 3 March 1982
The Queen officially opened the Barbican Centre. She called it ‘one of the wonders of the modern world’.
http://www.barbicanliving.co.uk/flats/rooms-and-features-2/the-barbican-hand-basin/

A breakthrough in washbasin design and installation, requiring no pedestal.
Design Centre Award - 1963

Gorgeous new taps introduced which took the industry by storm at the time. Became the classic tap design and sold in millions. Non-rising spindle tap. 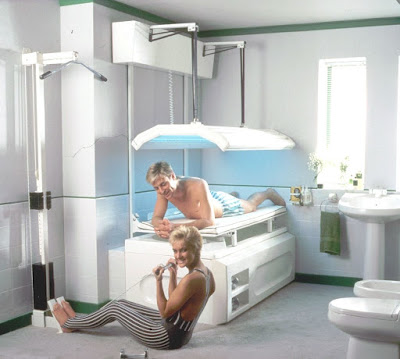 Products for the 'grey' market.  Well ahead of its time - the Avalon Suite.  Designed for families.